Time and Budget Charts show project status clearly.  But what happens when the scope changes?  Does the chart still work?  If so, how do you update it to reflect the new scope?

The charts can accommodate change in three ways, as follows:

Option 1: Chart against Current Scope Only

Contrast that with cumulative flow diagrams.  They do an excellent job of showing scope changes over time.  A cumulative flow diagram might show that, “We were doing OK until 3 weeks ago, and then we had that big scope increase, so now it looks like we’re way behind. But we haven’t been slacking – see, our rate of progress was fine for the old scope.”

With time and budget charts, that historical “excuse” is not shown.  People want status, not excuses.  So the chart measures everything against the most up-to-date scope and budget.  Our position relative to today’s target matters far more than our position relative to a target which is now obsolete.  In many respects I don’t care whether we were on track before the scope change – the scope has changed and I care whether we’re on track now.

Note that if scope increases, the green line effectively pivots downwards by a few degrees.  Its bottom end stays at (0, 0), but its slope lessens, since the work it shows now makes up a smaller percentage of the total.  For instance, consider this graph: 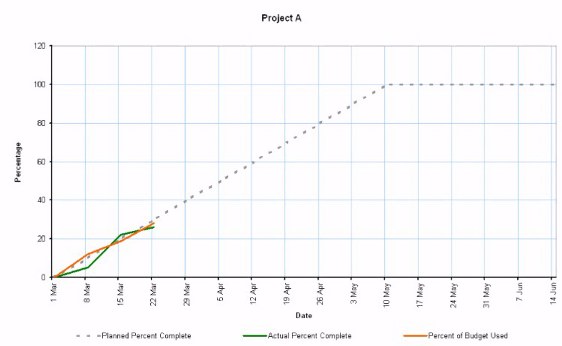 After a scope increase, it will look like this: 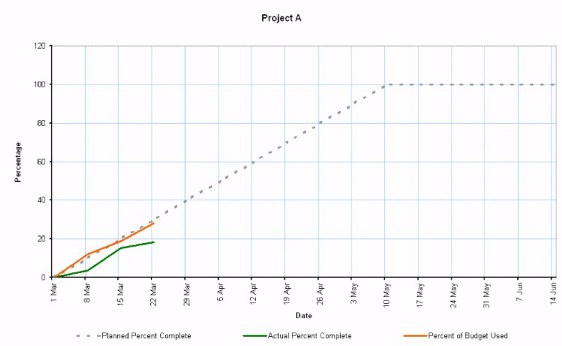 The green line has retained its shape, but has pivoted down because it represents a smaller percentage of the (new) scope.  The red and grey lines are unchanged, because the budget and schedule were not altered in this example. 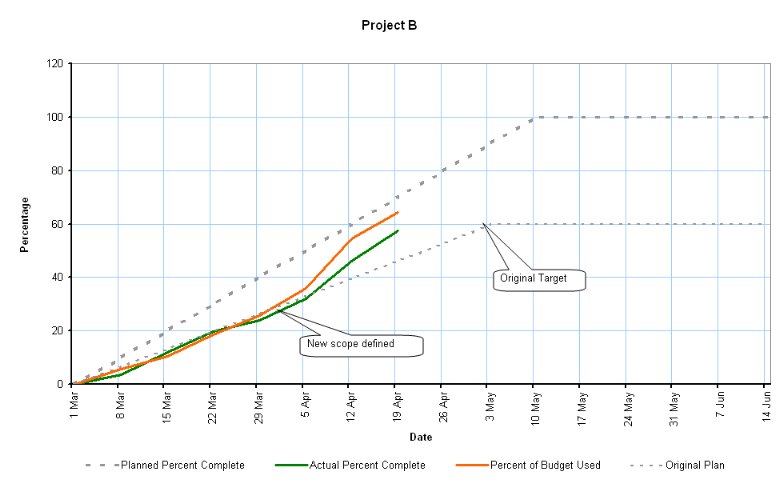 One grey line (the upper one) is the current target.  The other grey line peaks at a lower level and an earlier date.  It is the previous target. The date of its peak is the originally-scheduled completion date. The percentage at its peak represents the original scope, as a percentage of the current scope.  As you can see, until week 5 the project was on track to hit the original target.  Now, the new target gives the team a lot more scope (and a little more time). They have to increase their rate of progress if they are to meet the new target.  You can see them trying to do so, with the upwards kink in the red line.  The upward kink is probably due to overtime and/or some additional team members.

(By the way, the little bubbles to label things aren’t just for this page – they’re handy on real-life charts too.)

To reiterate, all the lines are percentages relative to the current scope and budget.

You can also show old targets with points instead of lines.   If you have several old targets, you might try something like this: 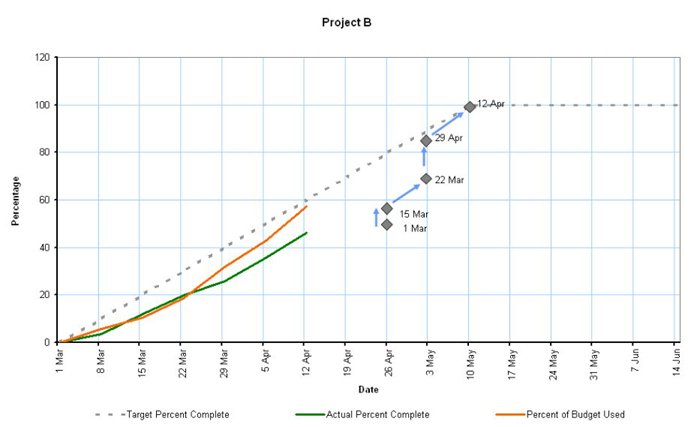 The little diamonds show all the “historical” points where the grey line used to hit 100%.   All are relative to the current scope.  Each is labeled with the date at which it became the current target.  In this hypothetical example we see that, on 1 March, we thought that the project was only 50% of its current size and that it would be completed on 26 April (we get this date from the X-axis position of the 1 March diamond).  On 15 March, the scope increased slightly and the delivery date remained the same.  We had additional increases on March 22 and 29, slipping the deadline by a week and taking the scope up to 85% of what we have today.  Finally, on 12 April, the scope was increased to the current 100% level, and the deadline was slipped by one more week.

I like the way this chart shows the “path” of historical targets moving through the coordinate space of the graph. But I must admit I don’t actually use this chart on my own projects. I prefer simple charts that show one old target at most.

Unlike me, many people do want to show several old targets.  If you’re one of those people, you may encounter a problem with Option 2.  While the little diamonds show scope change well, they can’t show budget changes too (if the budget changes are out of sync with the scope changes).  For instance, perhaps management increase scope by 10%, but still hope to complete the work within the original budget.  If that happens, you can’t use the diamonds for both scope and budget.  You have to use them for just one or the other.

The first chart, the time and budget one, would be exactly according to Option 1 above.  How should the second chart look?  Very simple, I think.  Here’s a very basic Scope History Chart: 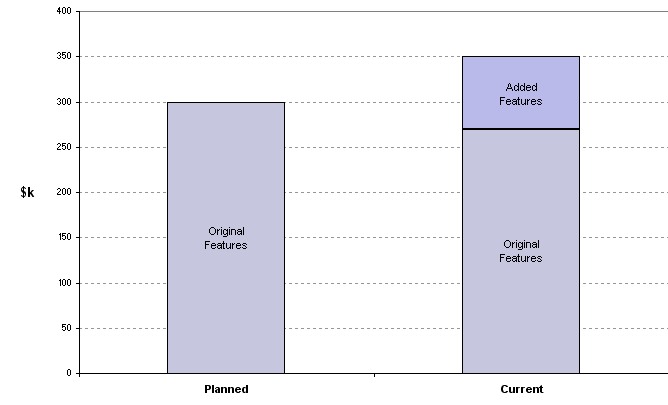 I haven’t actually shown budget figures directly on this chart.  Instead, I’ve simply drawn the graph so that the y-axis is in dollars.  You can relate past and present budget targets directly to the y-axis.  (We can’t do the same on a time and budget chart because everything there is expressed as percentages of the current targets.)

Many variations are possible.  For instance, you might show the scope as it was at several times in the past.  Like this: 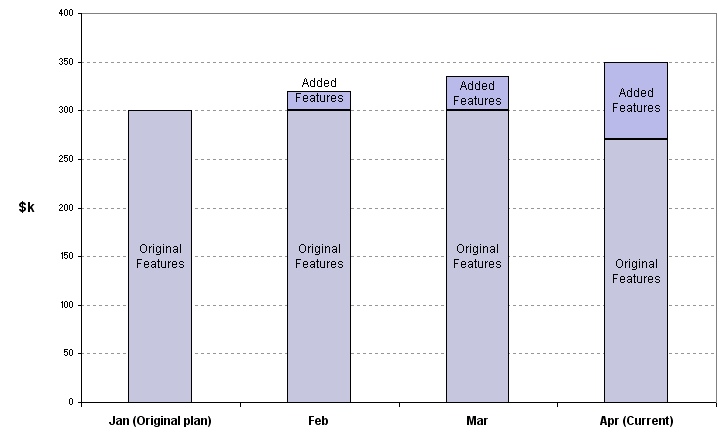 Finally, you might add an “actual cost” column to the right hand side.  Note that, if you haven’t finished the project yet, the “actual cost” must be your best prediction of what the final cost will be.  “Trend lines”, on your time and budget chart, will help you make that prediction.

Here’s an example of a Scope History Chart, with actual costs shown in red.  (To save space, I’ve shown only two blue-grey bars. You can have more, as in the chart above, and then add the red cost bar onto the right-hand side.) Here’s the example:

(If you’re working under a fixed price contract, the customer will pay for scope creep but not effort creep.  In that case, you should draw the red bar not to show what the customer actually pays; but rather to show what they would pay, if they paid for every hour worked on the project. That gives you a true measure of actual effort.)

What Do You Want To Show?

I doubt you can fit all of them on a single chart!  Fortunately, you don’t have to.  You can cover most of them with two charts: a Time and Budget Chart and a Scope History Chart.

Thanks to Bevan Arps and Alistair Cockburn.  Their questions about scope change in Time and Budget Charts encouraged me to write this page.